The Magic of Finding a Job You Love: ’11 Alumna & Disney Copywriter 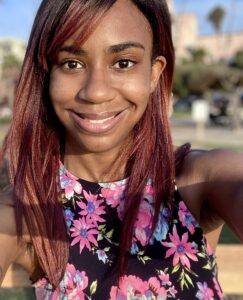 In the far corner of the Disney, realm exists a small population of workers you likely never heard of. It was here I met Elan Carson, ’11 alumnus, a copywriter at Disney Media & Entertainment Distribution in Los Angeles, California. While the name lacks whimsy, it’s a critical role in supporting the kingdom’s expanding reign from a mouse to a universe of superheroes.

You can see samples of Carson’s work in nearly every retail chain like Target, Walmart, Off Broadway Shoe Warehouse, or even specialty brands like Shinola watches.

Grab any Disney merch – A doll, action figure, tea set, journal, watch, etc. Notice the tagline on the package– “My Courage is Fierce” on a Disney Princess bed set and “Just Go with the Bow” on a Minnie throw? That’s Carson’s work. And it takes serious consideration to ensure the words capture the voices from the screen. “You have to think about what each character would say. A princess sounds much different than a villain. It’s wild,” explains Carson.

But how did Carson, a young millennial with a résumé overflowing with tech jobs and random copywriting gigs come to recently celebrate her 5th anniversary at the kingdom? This is where the tale unfolds, like Carson, the unlikely protagonist overcomes a series of ever unfortunate events to find her happily ever after

In the Shadow of Unemployment

After graduating with a degree in Creative Writing, Carson took an e-commerce copywriting job involving more clicks of control-C than actual writing. Eventually, the “copy and paste” work led to her saying goodbye to the e-commerce world for good, instead of pursuing what she thought would be more creative work in personal care. She was wrong. Adding creative flourishes to her writing when her boss wanted campaigns to sound more clinical was grounds for termination. “I was actually told I was too creative in the job”, says Carson.

In the shadow of unemployment, Carson set her dreams of writing to the side to pursue a new career. “I knew tech needed more women. And there was so much money to be had.” Despite having no related experience, Carson was hired by a fellow alumnus who needed an SEO marketer. “I think I was hired because we went to the same school,” explains Carson. And the job was certainly alluring! Her role came with game rooms, a masseuse, snack bars, and hefty paychecks. And upward mobility was a given. “I saw my peers advance; they were making tons more money. Some were hired to work for Google. I thought, that will soon be me!” And as such, Carson jumped ship herself to join a boutique SEO agency that offered her a substantial pay raise and the added bonus of free lunch every day. While Carson was enjoying the pay and luxury perks, she spent her lunch hours writing her second book. But once again, her creative urges weren’t welcome. “You’re a writer. We don’t think SEO is a fit,” her supervisor explained as he handed her a final paycheck.

Carson knew her ex-employer was right. She needed to build up her writer’s portfolio. She took to social media, advertising her skills to small businesses for free. Quick to recognize a deal, business owners returned her calls to work on email marketing campaigns for jewelry brands, fashion write-ups for luxury resale shops, and SEO writing for mom-and-pop shops.

Let’s Make This a Fairytale

Eight months later, the time between her freelance work and last full-time job, Carson received a call from Disney with an offer to interview as a result of her refreshed portfolio. It was off to the most magical place on earth.

When Carson arrived for her interview, she found the place was eerily empty. “Someone had called in a bomb threat at the ABC building across the street moments before I arrived!” Undeterred, she began roaming the grounds in search of her interviewers. When she found them, they not only were shocked she found her way into the building, a maze in and of itself, but they were also shocked she wanted to proceed with the interview. Two weeks later, they offered her the job.

Carson finally found her fairytale ending. She recently celebrated her 5th year anniversary and has no plans to leave. “I stay because of my boss. I call him Yoda because he’s more of a mentor, er, a guide,” explains Carson. “I love my team and the culture. And everyone is so aspirational!”

Near the end of our interview, I asked Carson what readers should take away from her story, given she experienced huge challenges before she found her dream job. Her response was without delay, “If you have only two traits to offer, grit and tenacity, you’ll make it.”