Immigrants In the Workplace | A Know Your Rights Series 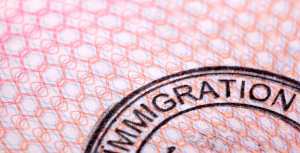 This article is part of our Know Your Rights in the Workplace series. All written information within this article is not legal advice. Current Federal, State, and Local laws are subject to change since this article was published. If you are seeking legal expertise, please consult a licensed legal professional.

Around 17% of the U.S. workforce are immigrants according to a 2019 report by the American Immigration Council. And while these incredibly hard-working individuals are woven into the fabric of this country, they’re often targets of political posturing. To defend yourself, know your rights when looking for a job.

Who Counts as an Immigrant?

An immigrant, as defined by the U.S. legal framework, is someone who was born outside the country and its territories, or has not been naturalized. And before you tweet us, yes, those born overseas to a U.S. citizen can be issued an official record of being a U.S. citizen­­­­––think military families. You’re welcome to debate this definition in the voting booth or over the holidays with your uncle Jim, but we’re going to keep to this definition for the purposes of this article.

Can an Employer Refuse to Hire Immigrants?

The Immigration and Nationality Act makes it illegal for employers to discriminate against someone in the hiring, recruiting, and termination process due to their citizenship or immigration status, including a person’s national origin if they have the legal right to work in the U.S.––and this includes someone’s perceived status, such as an accent. As a backup, the Civil Rights Act also doubles down on making it illegal to discriminate against a person due to national origin.

Can an Employer Ask Me About My Status?

In general, most employers may not inquire about your place of birth, native language, ancestry, accent, or country of origin. Think about this before you list your bilingualism as “Native Speaker” or casually respond to an interviewer about where you are from. And if you’re wondering, no, an employer cannot ask you where you’re from, like REALLY from. The EEOC reminds employers to only ask if it’s professionally relevant, as it could easily offer evidence of illegal discrimination.

Once you receive a job offer, you will likely provide documentation disclosing details about your nationality via the I-9 Form. But remember, it is illegal for an employer to rescind the job offer because of your citizenship, immigration status, or national origin if you have legal authorization to work in the U.S.––unless you’re applying to work for the U.S. government, but we will get to that soon.

With most jobs, you’ll fill out a variety of documents after the job offer––think retirement plans, tax forms, and yes, the good ol’ I-9 Form. This unassuming document is issued by the Department of Homeland Security and is required to be completed by citizens and non-citizens alike. It outlines various items you may use to prove your identity and your legal right to work in the U.S. But be diligent! This paperwork is legally available upon request to authorized U.S. government officials. You don’t want to have an expired work permit on file when someone from DHS shows up.

Can an Employer Refuse a Certain Document?

If your work authorization is based on an international visa or accepted status, be patient with your potential employer. Many employers have not seen the immigration paperwork you will provide, so they may need some additional information or assistance. Their hesitancy will most likely be based on their discomfort with unfamiliar information, not you.

You don’t have to be a U.S. citizen to work in the U.S. and you don’t even have to memorize the lyrics to Don McLean’s “American Pie”, although, it may lend nicely to making friends at workplace happy hours. As long as you have the documentation to prove you are legally authorized to work in the U.S., you’re all set. As clarified above, this will be provided via the I-9 form. If an employer denies you the job because they say they only hire U.S. citizens, they’re breaking the law.

What about DREAMers and DACA?

A DREAMer is an undocumented immigrant who arrived in the U.S. as a young child and lived in the U.S. ever since. If you’re a DREAMer who applied and received DACA, also known as the Deferred Action for Childhood Arrivals, you have two years of work authorization, and it is renewable. Employers don’t need to sponsor you, nor can they refuse to hire you because of your status.

The Employers Who Can Discriminate

Contrary to popular opinion, discrimination is not always illegal. If you ever tried to buy a bottle of vino at 20 years and 11 months old, you’ll know what we mean. The same applies here. Employers with 15 or fewer employees may be exempt from the laws mentioned in this article, not to mention, quite a few other workplace laws around discrimination. Check the state and local laws, as some locations have more restrictive rules than the Federal laws.

And then there’s the U.S. government––U.S. government agency jobs are limited to hiring U.S. citizens. This also means you can’t be President of the U.S. But there are rumblings from various corners seeking to challenge this, so stay tuned patriot!

The unfortunate reality for immigrants in the U.S. is they are seen as easy political pawns to rally up donations for a campaign. So, while knowing your rights in seeking employment will offer some protection, you’re not without risk. Always verify you have the correct paperwork, and it is not expired. And never misrepresent yourself on the I-9! From a simple error to an outright lie, you could be deported and possibly barred from ever returning to the U.S.

When seeking employment in the U.S., it’s illegal for an employer to discriminate against you because of your citizenship status, place of birth, native language, ancestry, accent, and national origin provided you are authorized to work in the U.S. and have the governmental approved paperwork to approve it––see the I-9 Form. If you’re a DACA recipient, you get two years of work authorization, and it is renewable. But as you proceed, be mindful of what documentation you provide. This paperwork is available upon request by the Department of Homeland Security and other select government agencies who may not be so forgiving if they discover you have an expired work permit.

About the Author | Thomas Guzowski is an employee at the University of Redlands. He regularly contributes to articles around career and professional development. If you’re curious, send him a message. He loves to talk shop.